Some Interesting & Important Tips About Underwear From Unitex Underwear

With the changes of the times, people have begun to pay attention to their own health. For example, many big and small things have attracted the attention of many people. The intimate clothing we often wear, especially this aspect, has attracted many people's attention. After all, this is an item that is in direct contact with the skin, and everyone will first pay attention to its choice. Generally, when women buy underwear, first of all, they will consider what kind of quality it is, and at the same time, they will also pay attention to its price. In order to buy better clothes, they will not hesitate to spend very expensive prices, just to keep my body healthy. Under Panties are a type of underwear, but most people don't pay much attention to this little undergarment. In fact, underwear has a lot to do with human health. Because if you don't clean your underwear, it is very likely that bacteria will remain on the underwear, causing serious problems to the body. Today, let's talk about those neglected underwear knowledge points in the form of question and answer.

Q: How long does it take for the underwear to be replaced?

The lifespan of a pair of underwear is half a year. Microbiologists from all over the world have studied this. A dirty underwear will be stained with bacteria such as Salmonella and Escherichia coli. Even if it is cleaned and dried properly, the bacteria on it cannot be completely killed. Therefore, under normal circumstances, it is best to change underwear every six months. If the comfortable breathable underwear is deformed, the material becomes dry and hard, and the stains cannot be washed, it must be replaced in time. 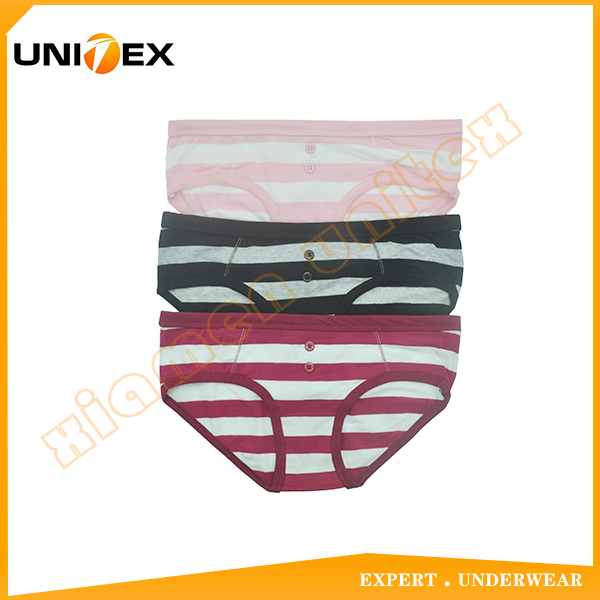 Q: How to clean your underwear?

Underwear should be changed every day, washed every day, and must be hand-washed when cleaning. Custom breathable underwear is generally relatively small, in order to increase the friction density, it is recommended to pinch with thumb and forefinger, and rub carefully. The utensils are preferably dedicated, and the water is preferably cold water.

Q: Why can't the underwear be washed in the washing machine?

At present, some fully automatic washing machines are easy to cause the growth of mold due to the reasons such as the residual water is not easy to discharge and the gap between the dewatering tank and the washing tank is small. According to authoritative testing data, up to 60.2% of the molds detected in the inner tank of washing machines are very dangerous for women.

Q: Can I add disinfectant to underwear cleaning?

Q: Why can't the underwear be turned over to the sun?

Many people like to turn their underwear over to dry, thinking that the ultraviolet rays in the sun can kill bacteria. But turning over the underwear is actually not good for health, because there are soot, dust, microorganisms, hydrogen sulfide and other harmful substances floating in the air, which will adhere to the close-fitting side of the underwear, wear to the body after easy to cause allergic itching, and even induce a variety of skin inflammation.

Q: Can I still wear my underwear if it fades?

Dyes are harmful to the body. If the underwear fades as soon as it enters the water, it means that the quality of the underwear is very problematic, and it is recommended not to wear it again. Underwear is close-fitting clothing, and quality problems will endanger human health. You must buy products with better quality. You would rather save money elsewhere than here.

Our UNITEX team has been engaged in the underwear industry for more than 20 years. From a professional point of view, we have also made a brief overview of the fabric:

1. Firstly, the body feeling of the fabric of the underwear must be comfortable. As the second skin of the human body, the feeling of wearing it should be as comfortable as not wearing it. Therefore, the yarn must be as fine as possible. The finer the yarn, the less rigid it is, the more bendable and soft it is, and the fabric produced in this way will be soft and considerate.

2. The fabric must be added with spandex as much as possible. Cotton spandex panties can make the fabric retract and fit on the skin, and has good resilience, and the fabric is not easily deformed. If you don't add spandex, your panties will fall off after a few washes and won't fit at all. In this way, wearing it, it will always rub against our delicate skin, which is not only bad for the skin, but also makes us feel uncomfortable. Anyone who has worn it without adding spandex must have a deep understanding of this.

3.The choice of fabric should take into account both water absorption and breathability. In this way, the sweat wicking underwear emitted from the surface of the skin can be transmitted quickly, keeping the private parts in a relatively dry environment and minimizing the space for bacteria to grow.

In short, when choosing underwear, you must distinguish carefully in order to purchase really good underwear. Our Unitex Underwear may be one of your best choice.