As people's personal belongings, underwear is easy to breed bacteria if it is not stored properly. How to store the underwear can make the underwear clean and tidy, fold the underwear neatly and orderly, and protect the hygiene of the private parts of the underwear must be very important. After all, life is full of bacteria, and the ability of bacteria to survive is extremely strong. Meanwhile, it’s no fun having to dig through your overflowing underwear drawer to find your favorite briefs or bra. Today, we UNITEX UNDERWEAR, will share with you how to fold and store intimate clothing such as underwear, to keep your underwear in good order. We believe, something as small as getting dressed in the morning will be less of a huge headache. 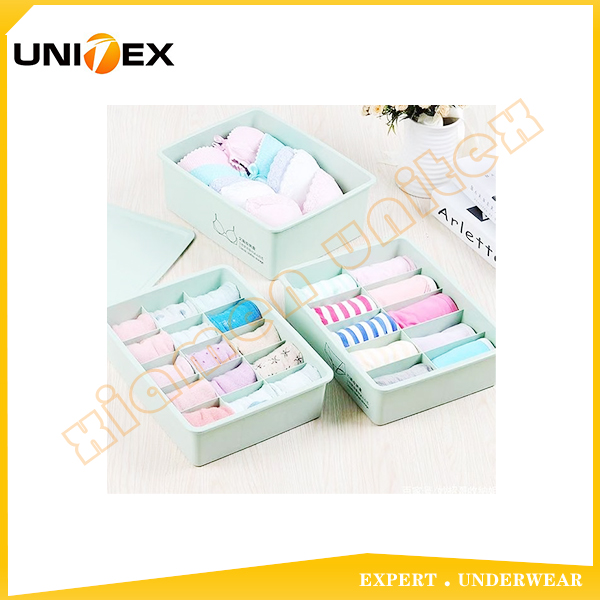 How to store underwear

Separating and Arranging Your Underwear

-Empty out your underwear drawer onto your bed.

-Pick out and discard underwear that you do not want to keep.

-Organize your underwear by type.

-Separate your underwear by color or pattern.

-Sort your underwear by functionality.

You can choose a storage box with multiple grids. Before use, wash and disinfect the storage box before use to avoid bacterial growth. After all, comfortable breathable underwear should pay special attention to hygiene as private clothing. The sterilized underwear storage box can be directly put into the wardrobe for use. In order to keep the underwear clean and tidy, when placing the underwear, fold the private part of the underwear inward before putting it in the storage box. Don’t directly knead into a ball and put it in the closet.

Or use a transparent storage bag, fold it and put it into a sealed storage bag, which can reduce the entry of dust and bacteria, and it is also convenient to put it directly into the suitcase when traveling on business, which is convenient to carry.

How to fold underwear

Fold the two sides of the breathable boxer underwear in half along the center line twice to form a thin and long strip. After folding the elastic waistband side of the underwear from top to bottom three to four times, it becomes a small tofu block, and then put them in order to the small compartment of the storage box.

Turn your sweat wicking underwear upside down, the side they are wearing is facing out, fold one third of the elastic part to the triangle area once, turn it over, fold the two sides of the panties to the middle part each time, then fold the remaining triangle part. It can be put into the storage box by inserting it into the slot upwards.

The folding method of underwear is not complicated. After laying it flat and folding it according to any of the above methods, you can easily complete the storage work of underwear, and the wardrobe at home will not be messy. This way of underwear not only saves storage space, but also a good way to take care of ladies lives.

We, Unitex is a professional underwear supplier, dedicated to all kinds of underwear, with professional knowledge and a strong team. We still have a lot of common sense about underwear. If you want to know more about us,please always feel free to contact us.