With the improvement of living standards, people's pursuit of clothing quality has also improved. Whether it is underwear, clothes, shoes, leather bags, quilts, etc., the quality can be seen from the stitches, so some merchants will describe the details of underwear stitches to highlight the quality of underwear. Do you know what sewing machine these smooth and clean stitches are sewn by? Let's take a look at the high-quality sewing machine in the underwear manufacturing industry - four needles six lines.

What is four needle six lines?

Four needle six lines originated from a curved back patch sewing machine introduced and developed by Japan's Oling Company, which is mainly used for splicing and splicing of sewing pieces. This machine sews the internationally recognized ISO607 stitches, which are highly dynamic and consist of four upper threads, one bottom thread and one Hash thread. It has a unique sewing effect of high elasticity, flatness and high strength.

What are the advantages of four needle six lines?

Four needle six lines are widely used in the underwear industry. The barrel-type machine base and the walking presser foot make it easier to stitch high-elasticity fabrics (such as nylon fabric underwear) and linden over seam. , According to the different fabrics and uses, there are various specifications of presser foot needle position parts corresponding to single-cut double-cut, and equipped with a small servo computer motor that is integrated into one, the pursuit of high sewing quality and single operability New cutting-edge model. The key point is that the equipment saves the links such as flat seam and overlock seam in practical application, and has a leap in efficiency and quality compared with ordinary sewing machines. And the quality and appearance of processing are incomparable with ordinary sewing machines, which has written a new chapter for the innovation of the knitted underwear industry and increased more labor.

The four needle six lines consists of four upper threads, one lower thread and one stretcher thread. Compared with the three needle five lines stitch, the four needle six lines has the advantages of being beautiful, straight and similar to seamless, and is often used in the production of underwear and sportswear. This is a high-level craft. A four needle six lines sewing machine costs tens of thousands of RMB. The seams are firm, the trimming is neat and not hemmed, the stitches are beautiful and dynamic, and it can be perfectly sewn in multiple processes at one time. It is widely used in high-end sports, clothing, yoga clothing, underwear. Four needle six lines are also dedicated to the unique high elasticity, flat and high strength seam effect. 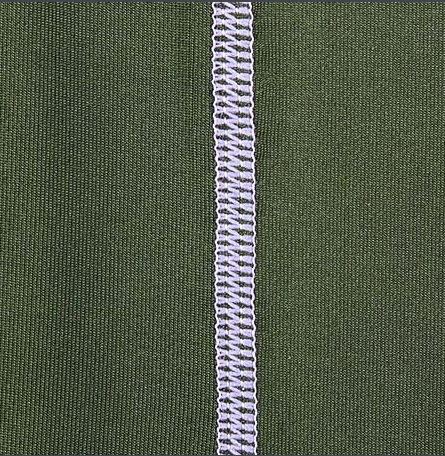 The four needle six lines consists of four upper threads, one lower thread and one stretcher thread. Compared with the three needle five lines stitch, the four needle six lines has the advantages of being beautiful, straight, and the seam of the seam is not so thick, which is similar to seamless. Commonly used in the production of underwear and sportswear (such as shorts sports bra set), with high elasticity, flat and high-strength patchwork effect, there are generally two layers, one layer less than three needle five lines.

As shown in the left picture below: the inside of the four needle six lines is smooth and flat, and the wireless head does not come off the thread.

As shown in the right picture below: the suture with three needle five lines will be thicker. 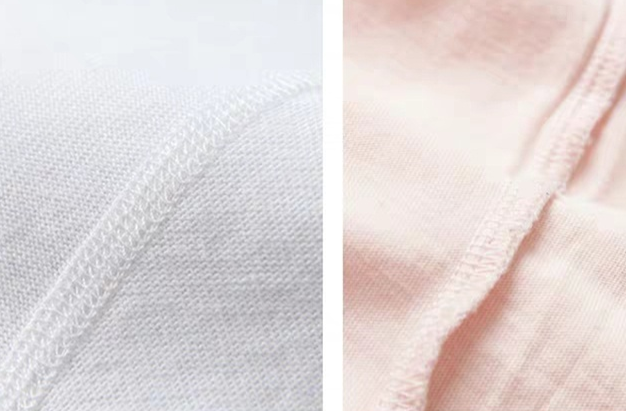